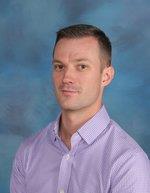 Curt Johnson, Ed.S., LSSP, NCSP, received his B.S. in Psychology from Brigham Young University in 2007 and his Ed.S. in School Psychology in 2010, also from Brigham Young University. Before coming to Calallen ISD, Mr. Johnson worked as the Psychologist Team Leader for Provo School District and as a Youth Counselor at Heritage RTC in Provo, Utah. In 2012, Mr. Johnson was awarded the Paul H. Henkin Scholarship for Excellence in Applied Research by the National Association of School Psychologists. At Calallen he works as an LSSP and is also a certified Crisis Prevention Institute Instructor for the district. Mr. Johnson is a former member of the Executive Board for the Texas Association of School Psychologists. When Mr. Johnson is not at Calallen, he is a Professor of Psychology at TAMUCC. In a brief respite from all of his interactions with Psychology, Coach Johnson is also the Assistant Boy's Soccer Coach at Calallen. Mr. Johnson's publications and peer-reviewed conference presentation history can be found on his website: